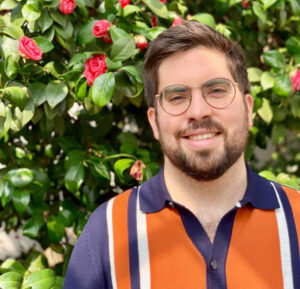 Q. You were the first person in your family to be interested in music professionally. Who was your main musical influence as a child – and why?
A. As a kid I was crazy for Michael Jackson’s music. I found his songs really upbeat and great to dance to, even if I couldn’t understand a word at the time (I was born and raised in Spain). I would take any opportunity to perform renditions of ‘Thriller’ and ‘Remember the Time’- dance routine included!

Q. What instruments did you study and where?
A. I studied trombone and euphonium. I started playing the euphonium age 7 in the Spanish Conservatoire system – going to instrument and music theory lessons every day after school. At 17, I decided to pick up the trombone, now my main instrument, so I could be one of the cool kids in the jazz band and also to play loud and brass-heavy orchestral repertoire.

Q. Let’s fast forward a bit: how did you end up studying composition?
A. When I started music college as a trombone student, I began making arrangements and writing some original pieces for some of the chamber ensembles I was involved in. I then realised that I really enjoyed this creative and perhaps more intellectual side of music and decided to make composition and music theory the focus of my studies. Later on, I ended up obtaining a MPhil in Composition and a MA in Composition of Music for Film from Bristol University.

Q. It’s hard to make a living as a composer, so what have you done as a day job?
A. It is! I trained as a classroom music teacher through the Teach First programme and taught in a couple of inner London schools. Recently I’ve made a career change and I now work as a management consultant. Nevertheless, I carry on composing as much as I can – it is important to remember that being a successful musician does not necessarily mean that you make a living out of it. For example, composer Charles Ives ran a successful insurance firm until his retirement!

Q. How did you get into singing?
A. Michael Jackson renditions aside, I started singing in choirs and in music lessons as a kid. Once my voice broke, I stopped singing for a few years. Then, while I was reading music at Cardiff University, my friends and I started joking that I should audition for the chamber choir – an ensemble for first study singers. I ended up auditioning, got into the choir and loved every second of it!

Q. What made you decide to go for the London Symphony Chorus?
A. When I started working as a music teacher in London, although I was involved in musical activities on a daily basis, I missed performing music at a higher level. At first, I thought about joining an orchestra, but I did not want to travel into central London twice a week to count bars and then play four notes on the trombone. So I decided to join a choir, and what better choir than the LSC which gives me the opportunity to sing alongside some of my favourite orchestras!

Q. As a composer, as well as a singer, what do you get from being in the chorus?
A. The endless learning and incredible performances. I’ve discovered a lot of new music and learned a lot from some incredible musicians such as Simon Halsey and Sir Simon Rattle. It has also changed my understanding of some music I thought I knew pretty well. For example, when performing Beethoven 9 last year with the LSO and Sir Simon Rattle, I found Rattle’s interpretation of the piece absolutely fascinating. It made me understand the piece and Beethoven on a far deeper level and brought up to my attention many nuances within the music that I had previously missed.