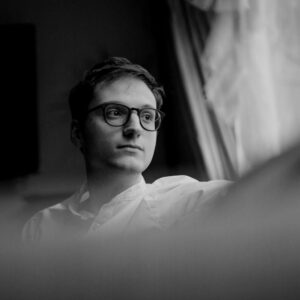 Euchar (pronounced ‘Yew-car) is short for Eucharist. It’s a clue to his parents’ strong religious belief, which has helped shape his musical career, which began in Malta. Now he juggles composing with a part time job as artistic director of St Johns, Waterloo.

Q. In what ways did the church play such an important part in shaping your musical career?

Having been raised in a very Catholic family and country, the church liturgy and the theatre played an ever-present and important role in my childhood. I soon found myself wanting to be part of it all and started studying the organ alongside piano. With church music being the most frequent live music I was exposed to, it was only a matter of time before I started bothering the Music Director with an endless stream of hymns and mass settings I was composing!

Q. After your music degree in Malta you came to London. When was that, what did you study, and where?

I moved to London in 2015 to pursue a Masters Degree in Composition at the Royal Academy of Music. I had the pleasure of studying and sitting in masterclasses with some fantastic composers including the late Simon Bainbridge and Oliver Knussen. I used to sneak into the Choral Conducting classes every week, too.

Q. What sort of music do you compose? And are you lucky enough to make a living from it?

Hard to really answer the first question! I tend to work with acoustic instruments and occasionally electronics in what might one refer to as the “contemporary classical music” world. I’ve been blessed enough to have composing projects to keep me going over the past years and hope to go back to studying in a few, too.

Q. I gather you wrote a tribute piece for Maltese journalist, Daphne Caruana Galizia, killed in a car bomb in 2017. Do you have any other music lined up for performance soon?

Soneto XIV is one of my only few works which directly reflects on the social and political. Daphne’s assassination struck me a lot, and the piece was my way of remembering her and her work.

I’ve had two new works performed recently in Cardiff at the Vale of Glamorgan Festival, a new orchestral work in Dubai by the Malta Philharmonic Orchestra and I have a chamber orchestra work coming up at Aldeburgh Festival 2022. I’ve recently recorded a new short work with the London Symphony Orchestra and an electroacoustic work for Malta’s National Theatre.

Q. When did you join LSC and why?

I joined the LSC in the autumn of 2015, only a few weeks into my move to London. Having given up my choral work in Malta in churches and cathedrals, I wanted to join a larger symphonic choir. I thought it would be the perfect way to finally learn iconic repertoire pieces as well as be involved in more contemporary projects (Ligeti’s Le Grande Macabre comes to mind). And, of course, making new friends along the way!

Q. The choir is a full on time commitment. How do you juggle the commitment with composing and a part time job?

It can be tricky at times, for sure! But my jobs and creative commitments permit flexibility. Moreover, whilst rehearsals can be hard work, they’re great fun and uncompromising on quality thus making the time I carve out for choir very worth it.

Q. What do you get out of it, as a singer and a composer? (More than just a hobby)

Since most of my work involves sitting behind a desk planning projects or at a piano writing notes down, the choir gives me a performative output. It also perfectly blends together my study of music with the joys of communal singing. Spending a good number of weeks with the same work really allows you to go into the detail of the composer’s working – that for me is the biggest privilege of this.

Q. Do you have any top tips for others considering joining – including those who may not have had your high level of musical training?

Come with an open mind! The choir goes through a wide range of repertoire from large-scale Haydn pieces to new or less frequently performed works, such as Bartok’s Cantata Profana. The rehearsal process is carefully put together which means that, whilst being very regular and at times intense, it’s perfect to learn works and become very comfortable with them without much concern.

Q. You went on the Beethoven 9 tour to the South of France last autumn. How was it?

The audiences in Monaco and Aix-en-Provence were incredibly receptive. It was the perfect treat after so many months of silence! Beethoven 9th is not only a regular piece in our schedule but also one of the last we performed together before the pandemic hit, on a European tour with Rattle and the LSO in February 2020. It was quite moving to come back with it!