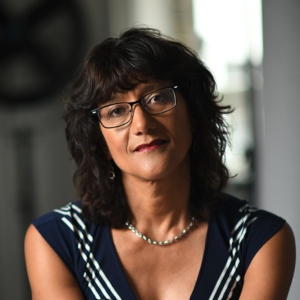 Gill has overcome quite a few challenges to sing with the chorus, but her contribution is far more than just making music. She’s also part of the choir’s social media team.

Q. When did you join the choir?
A. I’m a relative newbie. I went to a Brahms Requiem singing day, loved it, and decided to sign up for an audition.

Q. How did you get interested in singing?
Singing was something you did in my family. In her youth, my mum had been a performer: singing, acting and even dancing in the first all-Black London ballet company. Dad was a bass and with alto and tenor siblings we were a mini Von-Trapp family. I joined the school choir and was one of the first girls allowed in the church choir.

Q. Did you have any musical training other than singing?

A. I reluctantly attended piano and violin lessons but wasn’t too successful – eventually convincing my violin teacher that damage to a finger was permanent and was released from experiencing the excruciating noises I made.

Q. You were brought up on the Isle of Wight then went to Newcastle Poly eventually becoming a primary school teacher in Luton. Did you sing much during your student years?

A. For some reason I didn’t join a choir in Newcastle – I guess I found other distractions, being in a big city on the mainland.

Q. When did you take up singing again?

A. In my second year of teaching, the teacher running the choir went off sick during preparations for a schools’ festival. The organiser informed me that if I could sing then I could take over rehearsals. So I ended up taking the choir to The Barbican – my first visit!

The organiser became a good friend, and with six others we formed The Foolish Things, singing a varied repertoire – from show tunes to polyphony – for fundraisers. When another friend became accompanist for Luton Choral Society we showed solidarity, joining that too. I was hooked and became involved in many choirs – including exciting Voicelab projects at the Southbank.

Q. You’ve recently had some difficulties, health-wise. How did that impact on your singing?

A. In 2014 I experienced sudden hearing loss. The damage also caused chronic vertigo, raging tinnitus, and hyperacusis (pain responses to noise). Physiotherapy enabled me to manage the dizziness and learn to walk again (I still fall over at times), and noise-cancelling headphones and earplugs became standard wear outside the house. No longer able to work, I got really low when my consultant told me I would not be able to sing in tune or without pain, “You need to find a different hobby”.

My partner, overhearing me singing to myself, convinced me that I could beat this. I instructed a friend to be honest, not kind, when I was ready to try singing at the choral society. It was overwhelming initially. I hardly made a sound, but after a number of rehearsals she and the conductor gave me the thumbs up. I guess I’ve been quite determined.

Q. Were you worried about your hearing loss affecting your ability to cope in a large choir?

A. I constantly worry about tuning and blending. Profound deafness in one ear, and limited hearing in the other, drowned by tinnitus, means I struggle to hear over background noise. The sound of the choir and orchestra is just a homogenised mush in my head. Don’t even get me started on the challenge of face masks and social distancing! Voice reps now try to place me where I am most able to pick up the sound of my voice part and can see to lip read.

A. It’s always important to pronounce people’s names correctly. For this piece, paying honour to those who lost their lives, getting names right, was the least we could do. The first task was to research all those named, to establish their background. I was then able to call on people I knew, and people they knew, who were first language speakers, to advise on the correct pronunciation. My phone was filled with voice clips, which I then wrote out phonetically so that transliterations could be included in the score and I could support in rehearsals. Help from other choir members was invaluable.

Q. You keep fit with running. Tell us about the running group on tour.

A. Tours are fabulous for getting to know people and getting out with the runners provides a completely different perspective to the cities we visit.

Q. Any tips for people thinking of auditioning?

A. Don’t overstretch yourself. Chose something you know well and feel confident to sing, and just sing your best. I chose Fauré’s Pie Jesu – not complicated, but having sung it at Mum’s funeral, I knew I could sing it regardless of nerves. Remember, they want you to do well.