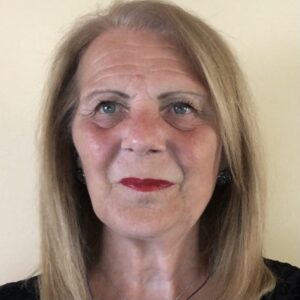 Q. You come from a musical family background.  Tell us a little bit about them and how they influenced your own musical career.
I was very fortunate to have parents who supported me in my musical journey. My father was an Eb Clarinet player who was a band boy in the Lincolnshire Regiment and my mother had a very good singing voice and played the piano. I can remember my grandmother talking about a family member who was an opera singer and my uncle played the cello. They were of the generation who enjoyed musical soirées so most of my family enjoyed this form of entertainment in their early years in the 1940s. When I was born prematurely, weighing 2lb 3ozs, the consultant told my parents that I would be tall and I would play the piano. Although I was very tiny I had very long fingers. He was correct: I did eventually play the piano and I am tall!

Q.What instrument did you learn as a child and what level did you study to?
I started learning the piano when I was six and studied the French horn from the age of 11. My teacher said I had a very good sense of pitch. I was very fortunate to live in Hampshire and gained an exhibition award on both instruments studying with the top teachers in the county. I was also a member of the Hampshire Youth Concert Band and Youth Orchestra.  We often had a very young conductor who would come and work with us: Sir Simon Rattle!  I studied as a mature student at Trinity College of Music (London) gaining my Licentiate (LTCL). I then went on to get an MA in musical education.

Q. With that musical background, what were your career options?
I wanted to pursue a career as a professional horn player in an orchestra but sadly it was unheard of for a female to be a member of the brass section at that time. I decided to audition for the Women’s Royal Amy Corps, which at the time was the only female military band in the world! The competition was very high, so I was thrilled to be offered a place on French horn and piano. It was an honour to serve Queen and country and I was very fortunate to combine my love of music and travel in a career. I studied at the prestigious Royal Military School of Music and had lessons from orchestral horn players Alfred Cursue and Denzil Floyd. Denzil played horn in the LSO from 1954 -1957. While living in Germany I played in the Lubbeke Symphony Orchestra, finally fulfilling my dream to be in an orchestra.

Q. What was different about being a musician in the army?
Working as a professional military musician was very similar to working in a professional orchestra. Long hours, always travelling and playing to a very high standard in concert venues across England and Europe. The biggest difference was playing while marching. The killer each year was the Lord Mayor’s Show in London!

Q. At what stage did you decide to audition as a singer with the London Symphony Chorus?
Throughout my musical career I have sung in a variety of choirs but wanted a challenge, and to sing in a prestigious London choir. I am certainly not a soloist but knew I had a good musical background to aid me to work to the standard required to be a member. I was absolutely thrilled when I was awarded a place in the alto section and I have never looked back, I love it!  To work at a fast pace learning music, sing in wonderful concert halls, travel in Europe and beyond – and to be conducted by the world’s top conductors – is an absolute privilege. Our chorus master, Simon Halsey, is a delight to work alongside: every rehearsal is different and challenging.

Q. Is there one thing, musically, you still want to do?
I feel very privileged that I have accomplished such a variety of musical pursuits. I only have one more box to tick and that is to be a cocktail pianist on a cruise ship!  Do I have any regrets? Certainly not. Would I do it all again? YES!