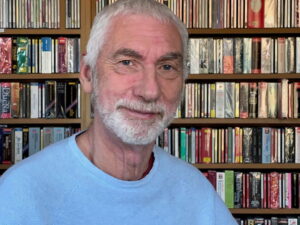 Q. You were born in Cardiff. Your parents weren’t at all musical. So how did you get into singing?

A. When I was just 7, my mum and dad sent me to the shops to buy something. I wandered into the big building at the end of our road on the way. It turned out to be a church. Someone there asked if I would like to join their church choir – which I did, six months later, when I was seven and a half. I was fortunate to go on several residential singing courses during that period.

At 10, I went to the Bishop of Llandaff School in Cardiff, where I was introduced to classical music by Diana Lambert, the music teacher. She took a group of us to a concert when I was 11 years old. The school was near to the newly opened BBC Wales studios, and she’d arrange for us to sit in on some of the orchestra’s lunchtime concerts as least once a week. I’d preferred popular music until then, but I grew to like classical music much more.

Q. Did you learn an instrument as well as singing?

A. Yes. I learnt violin, but not very well. I was deputy leader of the Cardiff Schools B orchestra and swiftly moved up to the A orchestra. But to be honest, having only just literally scraped through Grade 4, I knew I was not cut out for it and soon gave up. But I kept singing, including with the Cardiff Male Voice Choir and Llandaff Cathedral Choral Society.

Q. You started work at 17 in the photographic department of a store in Cardiff, then moved to Dixons, working on the shop floor. It was a career that took you through a couple of job (and place) moves. Tell me about them.

A. When I was 23, I moved to Cheltenham with my job and joined the Cheltenham Bach Choir and Gloucester Choral Society. I was also accepted to sing in the prestigious Three Choirs Festival in 1977 and 1980 – the 250th anniversary.

I moved again, this time to the giddy heights of London. That was in 1984. I joined the London Philharmonic Choir initially. The first concert I sang with them was Ravel’s Daphnis and Chloe and the Verdi Te Deum with Eric Leinsdorf. I later found myself singing with some of the most amazing conductors, including Klaus Tennsdedt, Bernard Haitink and Georg Solti.

Q. But you decided to audition for the London Symphony Chorus?

A. Yes – I’d been invited to sing with the LSC a couple of times as an extra, and to go on tour with them too. Those tours – especially to Paris and Rouen – were a defining moment in my life. I had a wonderful time. So, I joined the LSC in 1990. They were just so welcoming.

Q. How did you juggle work commitments with choir?

A. Although I worked in a shop, it was in the city, so it was closed at weekends. It meant I was free for weekend concerts. And if there were daytime rehearsals mid-week, I’d save up leave and take the time off. Luckily the branch I worked in was very close to the Barbican, so getting to rehearsals was easy.

Q. You’ve also been involved, on a voluntary basis, with the stage management side of concerts, working with staff at the Barbican to make sure everything is right for the performance. How did that come about?

The previous stage manager, who was also a volunteer, was retiring. He suggested me as his replacement. At first, I hadn’t got a clue what to do, but I know now – and it’s great fun. I enjoy working with staff at the Barbican and with the orchestra. You have to be prepared to make compromises though!

Q. You’re also the choir’s photographer – no surprise, given your career?

Well, I started out in the photographic department, which is where I learnt everything I know about photography! You can see some of the photos I’ve taken of the choir at: https://www.flickr.com/photos/42476561@N03/

I’m also a big fan of top-quality sound systems as a result of working for Dixons. I now have three QUAD systems and nearly 7500 CDs soundproofing the walls of my flat.

Q. With so many years in the LSC under your belt, what is your most memorable moment?

A. Definitely singing Berlioz’s ‘The Trojans’ with Colin Davis in 1993. It was incredible; everyone sang as one. It was an uncanny performance. But overall, what I’ve done with the chorus over the years has amazed me. We’ve had such amazing chorus masters and conductors who inspire you to give your absolute best and beyond. For this, I’ll be forever grateful.